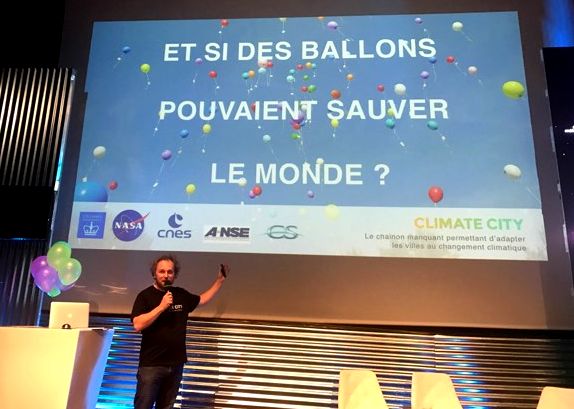 The sixth edition of Futurapolis was held in Toulouse on 24 and 25 November. Organised by “Le Point”, Futurapolis is a forum bringing together scientists, intellectuals, business leaders and public figures with a passion for technology to reflect and debate how our world can survive and prosper in the midst of technological change. The forum was held at emblematic locations around the Pink City such as the Faculty of Medicine, the Museum of Natural History and the Quai des Savoirs science museum and centre. Laurent Husson, President of CLIMATE CITY, gave a presentation at the Natural History Museum and attended a round table on Friday.

Early in the afternoon, Laurent Husson first gave a 15-minute presentation on the issues that led to the creation of CLIMATE CITY during the session devoted to “Technology will save the world”. This pitch session featured four innovators with technology projects to do just that. The session’s originality lay in the presentation at the beginning of the contribution of an object symbolising the various projects to arouse the public’s curiosity and make a lasting impression.

After short contributions from Erwan Kezzar, co-founder of the Ecole Simplon.co, Benjamin Böhle-Roitelet, founder of the Ekito start-up incubator and Céline Bardet, international lawyer and investigator, Laurent Husson introduced CLIMATE CITY through a handful of balloons tied to the speaker’s lectern.  The balloons are primarily related to the world of childhood but they are also very much representative of CLIMATE CITY. They provided a connection with the T-C60 balloons that will be deployed over cities to help them adapt to climate change as part of CLIMATE CITY’s ambition to make cities more resilient and so save the planet for future generations.

During the “City in the Clouds” round table, the question “How to deal with urban densification?” was explored, discussed and studied by the four speakers: Sybil Cosnard from City Linked, Michel Derdevet, Secretary General of Enedis, teacher and essayist, Dominique Faure, Vice-President of Toulouse Metropole and Mayor of Saint–Orens and Laurent Husson, President of CLIMATE CITY.

“Is growth destroying the planet?”

LAURENT HUSSON, CO-FOUNDER AND CHAIRMAN OF CLIMATE CITY, WAS ONE OF THE GUEST SPEAKERS AT […]